A fellow approached me with a question about one of ABC’s products. His nutritionist had recommended he add some B vitamins to his rations. He was wondering if the BVC-Mix would be suitable. I’m sure I shocked him when I told him that there were probably other and better choices. I went on to explain. BVC-Mix was not designed to be a stand-alone ration additive. It was formulated to be one part of a specialized group of minerals and vitamins to be separately self-fed to livestock in a cafeteria setting.

The BVC-Mix was specifically designed not only to provide a source of B vitamins but also to provide other ingredients that support the production of essential vitamins in the gastrointestinal tract of the target animals. It is part of the team with 14 or more other players. The players on the team, working together, supply balanced vitamins and minerals to the animals.

Consider Mulder’s Wheel. This mineral wheel shows interactions of 21 minerals out of a total of 118 that have been identified. Any change to one element affects at least two more and each of those affects two more, etc. Deficiencies or excesses of some elements alter the availability of other elements. These are individualized with regard to what the animals eat on a daily basis and further modified by individual variations in daily requirements of each separate mineral. I doubt even a modern computer could sort it out; but an animal, with the help of a team of minerals and vitamins, can make the adjustment to its daily requirements.

What would happen if you pulled a couple of key players from a baseball or basketball team?

What would it sound like if you silenced every 12th instrument of a concert orchestra or every 12th singer in the Mormon Tabernacle Choir?

What would happen if you disconnected a couple of spark plugs from a V8 gasoline enine?


What happens to animals when they do not have the 12 or 15 member mineral and vitamin team available to them? 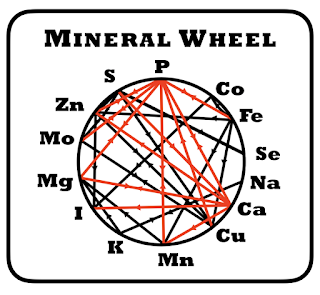 
This item was originally posted to a previous issue of Doc Holliday's Blog on December 20, 2016
Posted by R. J. Holliday, DVM at 10:11 AM No comments:

Victory Gardens Are On the Rise 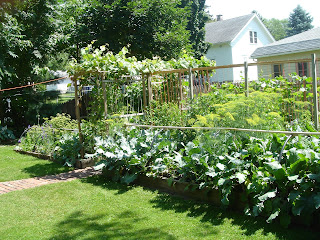 If you are not interested in riots and protests, coronavirus, or  political backbiting there isn’t much noteworthy news out there — even climate change seems to be on a back burner. 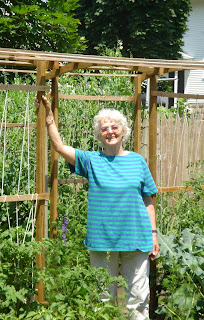 So, I decided to reminisce  a little.  After spending all of our lives in the Midwest, last year we moved to Idaho to be with our daughter and her family..  It’s not easy to leave family and friends.  Here is a Journal Entry from  Saturday, 16 Jun 2018
“I am 85 years old today!!  I never thought I’d make it to this age.   It was a nice morning and I took a little stroll around the  yard and admired Ruth’s garden.  It is a perfect example of her green thumb and her love of being outside working with her plants.  Over the years, we have put in a lot of work fixing up the place  — walks, fences, deck, raised beds, trees, etc.  It is certainly a reflection of both of our personalities — but mostly Ruth’s.  It will be hard to leave this place.  If we leave next summer we will have lived here for 28 years, longer than we have lived anyplace else.”

I don't know if the wall of plants in the one pictures is tomatoes or cucumbers, but whatever they are they were still growing

As I write this we have lived in Idaho for almost a year. We are reasonably well acclimated to the area and to our home and family here. 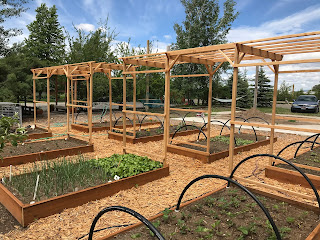 In an attempt to partially replicate the gardening environment we had in Iowa, for Ruth’s birthday this spring I arranged for our daughter, Suzie, and her husband, Kevin, to duplicate the raised beds system that worked so well in Iowa.  The project was started the 25th of April and completed 3 weeks later. As you can see it turned out extremely  well.  Some plants are already growing and I am looking forward to see the trellis parts covered with vines.

If there is a bright spot in the coronavirus debachle it could be the return to backyard gardening.  I remember the Victory Gardens of WWII in the 1940s.  Then, as now, it was good for the environment, it provided a source of inexpensive nutritious food, and it brought families together. What could be better than that?

My friend and former colleague, Robert “Dr. Bob" Scott, DVM would often lecture students and scholars alike about the importance of seeing everything you look at. This is a corollary to the scriptural admonition found in Matthew 11:15; “...he that hath ears to hear, let him hear.”

Laying aside any spiritual (or political) aspects of that concept, what are some things that we commonly look at but do not see?

One example; in spite of a broad array of research revealing evidences of animal intelligence, most livestock owners still scoff at the notion that our domestic animals have nutritional wisdom. Perhaps, they equate the eating behavior of animals in a CAFO with that of relatively unconfined animals allowed at least a modicum of choice to satisfy their individual needs for energy, protein, fiber, and minerals. 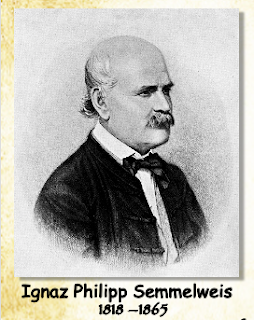 When promoting the benefits of cafeteria-style mineral feeding, I am often reminded of Dr. Ignaz Semmelweis, a mid-nineteenth century Hungarian physician who practiced in a birthing clinic in Vienna.

Appalled by the high incidence of, the often fatal, childbed or puerperal fever in his patients, Dr. Semmelweis developed techniques that lowered the incidence from over 30% to less than 5%. When he strongly suggested his colleagues at the clinic use the same technique, they ridiculed the idea. Dr. Semmelweis accused them of being murderers if they did not implement his procedures. The strife escalated. A preconceived concept of reality coupled with professional arrogance did not allow the other doctors to see what they looked at. Dr. Semmelweis was eventually committed to an insane asylum and was beaten to death by the guards.


Oh, I almost forgot! The earth shaking sin Semmelweis advocated was that doctors should wash their hands between examinations of obstetrical patients in the clinic.

In spite of all this, Dr. Semmelweis’ legacy is to be remembered as the Savior of Mothers and for the Semmelweis Reflex, a metaphor for the tendency to reject new evidence or new knowledge because it contradicts established norms, beliefs for paradigms.

When does your Semmelweis Reflex kick in?

What are you really feeding? 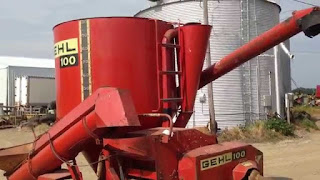 For a valid assessment of any ration, one must consider you are actually dealing with 5 different rations. This is especially true of TMR’s (total mixed rations) for dairy cattle but also applies to other livestock including horses. The five different rations are:

1.      The ration printed out by the computer is the “Holy Grail” of many nutritionists and is considered to contain the final output of our accumulated nutritional knowledge coupled with the latest chemical analysis of the feedstuffs involved.

2.  This second ration is what actually goes into the mixer. It rarely matches the print-out as accurate measurement of ingredients amounts becomes more difficult as the size of the mix increases. 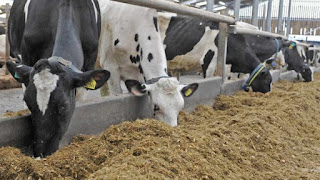 4.  What the cow actually eats depends on many factors. The ‘pecking order’ in a group of cattle interferes with uniform consumption. Many cows will ‘sort’ feeds, eating only the more desirable fractions.

5.  The final ration is what the cow actually digests and assimilates into her system. This one may bear little resemblance to the computer print out but in reality is the only one that counts.

To Brix or Not to Brix? That Is the Question!

Two items caught my eye in an article I read recently. One was a statement the USDA has determined that much of the food we eat today is grossly deficient in nutrient value – some say as much as a 50% reduction in some elements since the year 1963. The decline continues as minerals leave the farm gate and are not replaced. I am sure the same decline occurs in the plants we feed to our animals.

I was also intrigued by a reference to the use of the brix refractometer as a useful tool for the farmer or gardener to assess the nutrient value of growing plants.

The testing procedure is quite simple, requires no chemicals, and can be done almost anywhere, even the produce section of a supermarket. A drop of sap is placed on a glass table, covered with another hinged glass cover, and the reading is taken. Some refractometers have digital readouts which are easier to read. The only other equipment needed may be a small hand-held garlic press or a pair of pliers to squeeze sap out of stemmy plants.

Brix measures the sugar content or sweetness of the plant sap. Our taste buds do somewhat the same but the Brix reading gives a more accurate reference number for comparison and evaluation purposes. There are many Brix charts on the internet to help one evaluate the Brix reading for different crops and vegetables. High or low brix readings also gives you a an indication of the other minerals and nutritive elements present.

A Brix reading has many benefits for the gardener. In addition to being a measure of nutritive value it is also a soil fertility indicator. If a plant or plants consistently show low brix it indicates the need for remedial attention to soil fertility — perhaps a soil test and the use of an appropriate fertilizer.

A brix refractometer can be a boon to a farmer harvesting hay. There is an old saying that you should make hay while the sunshines. That is literally true as brix reading in a hay crop are low in the early morning, rise as the reached its zenith, peaks in mid afternoon and then declines. Timing of the cutting can be critical. There is a big difference in the nutritive value of hay cut early in th morning and that cut in mid afternoon. A brix reading taken periodically throughout the day will graph this phenomenon. 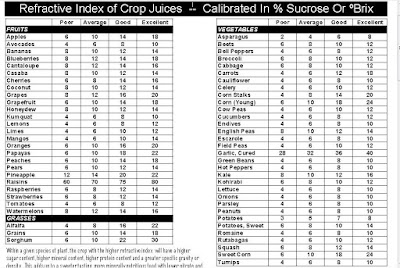